5 of the Most Haunted in Vermont USA: Phantoms of the Green Mountain State!

The phantoms of five of the most haunted places in Vermont are eager to tell their spooky stories. Here are our spine-chilling picks from the Green Mountain State!

The Green Mountain Inn was originally built in 1833 by Peter C. Lovejoy. After many changes of ownership and several expansions, it finally became a hotel in 1893 when Mark C. Lovejoy. Specifically, the history component that is strongly associated with the hauntings has to do with the son of an Inn chambermaid and horseman, Boots. He was born in 1840 in Room 302 of the Inn’s third-floor servants’ quarters and grew up to be a respected horseman himself. He realized local fame when he saved stagecoach passengers from certain doom when the coach’s horses bolted down Stowe’s Main Street one day. Boots traveled across America, many times enjoying risky behavior. His drinking landed him in a New Orleans jail where he learned how to dance (hence the origin of his nickname “Boots”). When he returned to Stowe, fate would call him a hero again where he saved the life of a little girl from being stranded on the Inn’s roof during a severe snowstorm. Unfortunately, the hero did not get to enjoy the rewards from his efforts. Boots reached the girl and lowered her to safety before slipping and falling to his death – from the roof above Room 302. (The room he was born in.)

Today many still hear Boots’ rooftop tap dancing steps from Room 302, especially when there is a snowstorm.

Considered to be one of the most haunted hotels in Vermont, many guests have volunteered their supernatural tales to confirm their status. Many have heard disembodied whispers. While others have actually seen full-body apparitions. Sometimes quick unexplained chills startle guests, raising the hair on their neck and arms. Property belonging to guests may disappear from gets misplaced. Others have claimed they were awoken from lights that turned on their own.

The most popular and intriguing phantom that has been spotted here is Abraham Lincoln’s wife, Mary Todd Lincoln.  She once visited the hotel in 1865 and supposedly enjoys the beauty of this hotel in the after-life. In fact, she has been seen along with one of her children. Unfortunately, when spotted, she vanishes quickly into thin air.

This eating establishment has exchanged owner and names a few time (previous Carburs Restaurant and American Flatbread), this popular spot is on the first floor of the Thompson Block. This parcel was built after the Great Fire of 1866. Many say the source of the spectral phenomena are the rough and rowdy rum runners who once trafficked their trade goods in the tunnels under the Burlington.

When eating at the Burlington Hearth, be on the lookout for a former employee who is said to lurk in the restaurant. This worker is said to have taken his life with a shot to his head in the establishment’s basement. The bullet is still lodged in the wall there. There are other spirits as well, include one that plays with the staff. Some female employees have been trapped in the basement freezer when the door slams shut on its own. Up in the main restaurant area, patrons have reported sudden temperature drops that cannot be explained. There is a poltergeist here that cannot be controlled. Glasses will shatter on their own and plates will fly off the counters by unseen hands. The temperaments of the phantoms do not stop here. Once a wreath hanging over the fireplace flew across the room one night.  The dishwashers will turn on by themselves.

Golden Stage Inn started as a stagecoach stop in 1788, with one guestroom for men and one for women. It became a private residence in the early/mid-1800s. Universalist minister Reverend Warren Skinner purchased the Inn and built the common rooms and the attached barn. He raised his family here and reportedly used it as a stop on the Underground Railroad.

Innkeepers have become familiar with a young friendly spirit they’ve named George, who appears dressed in a traveling cloak. Many say that his apparition bears a remarkable resemblance to Robert Redford. Innkeeper and owner, Sandy Gregg, first saw George when she was sleeping in a room on the third floor.  When she awoke, she saw a handsome man standing in the room wearing a wide-brimmed hat and a duster coat. What made him unforgettable was that he looked a lot like Robert Redford. "At the time, I just thought, well that was a good dream, and went back to sleep," Gregg said. Over the years several female guests staying on the third floor also reported seeing a man with a wide-brimmed hat, a duster, and a resemblance to Robert Redford. Gregg said that the cowboy spirit isn't scary or destructive, but she has experienced unexplained gusts of cold air, and on occasion, an item will go missing for a day or two and then reappear exactly where it was left. Other people have heard unexplained footsteps and electronics turning on and off on their own.

The inn was built in 1793 to be the private home of Colonel Joseph Marsh, his wife, Dorothy, and their children. He lived there with his wife Jane until they both passed. In 1845, Judge John Porter and his wife, Jane, purchased it. The Honorable John Porter died in 1886 and his wife in 1900.

Witnesses believe it is Jane’s ghost who lingers the inn. Jane's parlor and study used to be where Rooms 1-6 are now located. Here folks have heard soft disembodied footsteps walking on the floor above them. The trouble is, there is only storage up there. Jane's apparition has been spotted coming from the dining room into the main hallway as well. Her presence has also been felt in the dining area. There is a male entity as well. Unexplained whistling has been heard in the bar area. The phantom of Patrick Marsh is a bit mischievous. He likes to hide people's belongings and return them later. He has also been blamed for messing with the lights and televisions. 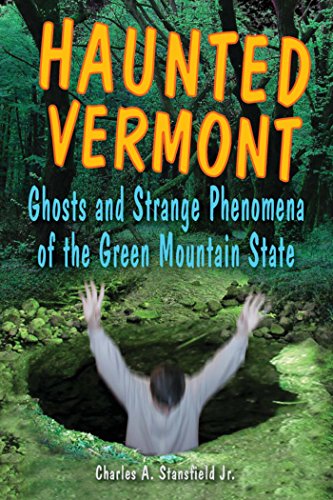